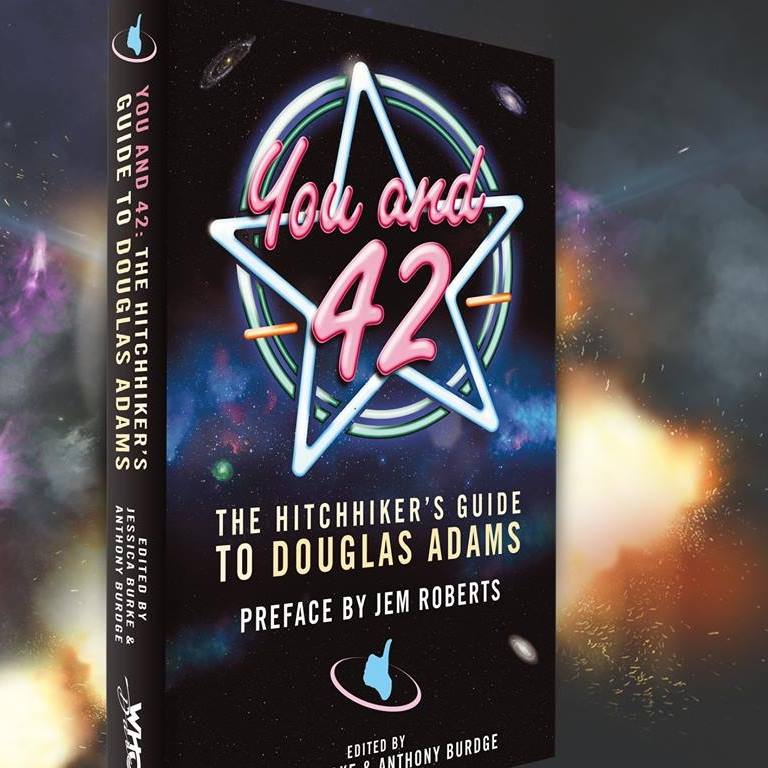 You and 42 is now available to order, from Who Dares Publishing. Please click the following button to be redirected to the Who Dares Publishing website.
YOU AND 42 @ WHO DARES PUBLISHING
INFORMATION ABOUT PRICING AND AVAILABILITY
Edited by Jessica Burke & Anthony Burdge
TABLE OF  CONTENTS

Preface: Learning to Fly - What about love and happiness? I sense deep needs for things like that...
by Jem Roberts

Foreword: It’s the interminability of Thursdays that I’ve always disliked.
by J.R. Southall

To Douglas...: A Letter of Thanks
by Maxwell Beeman


Douglas Finds the Target: ‘The Kamikaze Sketch’ from The Burkiss Way, March 1977
by Stephen Hatcher


A Guide to The Guide
by Ian Ham


Something was moving quietly through the Ionosphere...: The Hitchhiker’s Guide to the Galaxy Radio Series One
by Stephen Hatcher


Sharing and Enjoying: The Hitchhiker’s Guide to the Galaxy Radio Series Two
by Stephen Hatcher


A Glimpse into the World of Adults: The Restaurant at the End of the Universe (second radio series)
by Michael Seely


Excitement, Adventure and Lots of Hitchhiker Things: The Original Novel and other Douglas Adams Merchandise
by John Chanaud


Infinite Improbability and Some Information to Help You Live in it: A Personal Appreciation of the Original The Hitchhiker’s Guide to the Galaxy Vinyl Albums
by Graham Evans


Douglas Adams’ Doctor Who Masterpiece ‘City of Death’, which Combines Multiple Mona Lisas, the Origins of the Universe, Conjuring Tricks with Chickens, and the Value of a Solid Punch into Four Action Packed and Witty Episodes
by Annie Worrall


How Douglas Adams Made Me Stop Watching Doctor Who, or, How I Acquired A Sense Of Humour: Doctor Who, ‘The Pirate Planet’, & The Hitchhiker’s Guide to the Galaxy 1979 novelisation
by Jonathon Lyttle


Doctor Who Seasons 17-18: Enter the Anti-Adams Family
by Tim Gambrell


The ‘Shada’ Variations
by Ian McArdell


All Snuggled Up But Ready to Run: Doctor Snuggles
by Paul Driscoll


Fit For Purpose? The Original Radio Scripts
by Christopher Bryant


Fettucini and Kir: How Douglas Encouraged My Writing and Saved a Group of Teenagers from Being Bullied
by Shirley Rolls


The Chameleon of Comedy and the Ostrich of Obsession: The Guide and How to Incorrectly Deal with All of its Very Worthwhile Formats
by Christopher Payne


No Transforming Robots? No Spandex Super-teens? Don’t Panic! The Hitchhiker’s Guide to the Galaxy – 1981 BBC television adaptation
by Fred McNamara


How I First Found Out About The Hitchhiker’s Guide to the Galaxy My initial exposure to the book and television series
by Justin J. Rebbert


Share and Enjoy: How The Hitchhiker’s Guide Changed My Life, from the TV series to the novels and other versions
by Daren Carpmail


Excitement, Adventure, and Really Wild Things: Douglas Adams related memoirs, or How I became a field researcher for The Hitchhiker’s Guide
by Justin K Prim


Four Books, Two Swear Words, A TV Show, An Uncle: Life, The Universe and Everything
by Andrew Curnow


A Book, Life, and the Hoopiest Galactic Gal who's fun to be with! The Hitchhiker's Guide to the Galaxy
by Anthony Burdge


Life, the Universe, and GCSE English Reading: Writing a Story ‘in the style of’ Douglas Adams
by Tim Gambrell


The Name Game: The Meaning of Liff
by Barnaby Eaton-Jones


Teaching Us How to Fish: An Appreciation of So Long and Thanks for All the Fish
by Don Klees


The Very Last Chance to See?
by Ian Ham


Interconnectedness, a fridge, and Thor: The Unsummable Dirk Gently
by Benjamin Hooper


Is There a Place for Theology in the Multiverse? The South Bank Show 5th January 1992
by Paul Driscoll


The Long and the Short of Douglas Adams: Working with Douglas at Cambridge
by Bloody Martin Smith from Croydon


The Movie That Didn’t Move: The Illustrated Hitchhiker’s Guide To The Galaxy (1994)
by Kevin Jon Davies


Walking with Douglas: How Doug Helped the 1994 African Rhino Climb to Save Endangered Species
by William Todd-Jones


The Four Ages of Douglas
by Lillian Todd-Jones


A Life in the Hard-drive: The Salmon of Doubt
by Russell Cook


Comic Notes on a Failure of the Imagination Doctor Who: ‘Shada’ BBCi 2003
by Tom Marshall


Tying Up Loose Plot ‘Ends’ And Another Thing...
by Jared McLaughlin


Froody Hollywood Dreams: The Hitchhiker’s Guide to the Galaxy Movie
by Jared McLaughlin


Opening My Mind, or How I Learned to Stop Nitpicking and Love the 2005 Hitchhiker’s Guide to the Galaxy Film
by Chris Casino


The Wonderful World of Marvinism: Marvin and his View of the World
by Demetria Blacksmith


My Towel: A Review
by Ian Ham